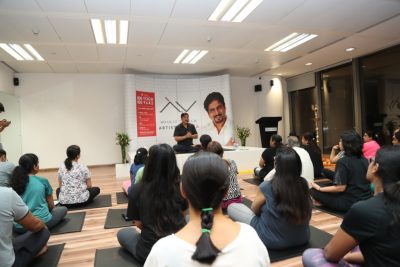 i1 news desktop report Abhishek Dhiman If ever there were a befitting example of a man who contradicts himself expertly, 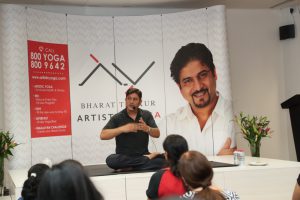 it would be Bharat Thakur, the man behind the brand Artistic Yoga. Yet, it has never been possible to contain him to the image of a Yoga guru. Though he has practically changed the way Yoga is perceived in India and the middle east, with his result oriented form of Yoga that focuses on fitness and well being, appealing to the youth and the old alike for its emphasis on science rather than dogma, for its dynamic and motivational approach, it is still not possible to pin him down to just the tag of a Yoga guru.Bharat is multi dimensional, with Art being as close to his heart as is Yoga and Spirituality. All of this can be attributed to Bharat’s unique up-bringing. At the age of four, he was taken to the caves around Gomukh in the higher reaches of the Himalayas by his master, who belonged to an ancient lineage of adepts.He lived in an unusual environment, 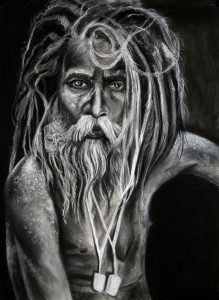 which was snow bound throughout the year, with almost no vegetation, practically no contact with civilisation, where you could not take your food or even sleep for granted. It was at once a survival mode as well as an immersion in meditation and silence, where the natural elements kept your company and life was lived around the fire pit or ‘dhuna’ in the caves. What marked him out, in such a world was his deep interest and fascination for sketching, which came naturally to him as a child. With no art school, or art material in the caves, he was constantly drawing on the ice, using the soil, leaves and so on to create what can be called installations in retrospect. These were the seeds of the artist. Yet his life was on mission mode and the mission was Yoga. After eleven years in the hills, Bharat pursued his formal education where he specialised in exercise physiology that culminated in a Phd. Following this he started his Yoga Company, Bharat Thakur Artistic Yoga and over a period of two decades, the company grew to become an internationally renowned brand spread across the Middle East, Russia, Central Asia and Europe. 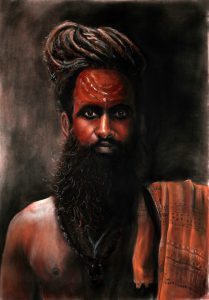 Bharat’s art career was on a slow burn through this period as all his energies went in creating the Yoga movement. He called his method of Yoga ‘Artistic Yoga’ as art was his way of life. Art to him combined truth, beauty, spirit and passion. Through all these years, he kept up the sketching and developed a fair amount of familiarity and ease with the medium of water colour and charcoal during his years as a student and while helming the Artistic Yoga movement.And like art was essential to his Yoga, soul is essential to his art. His paintings and sculptures are a visual manifestation of the beauty that springs straight from the soul. His art is also informed by his study of the human anatomy and physiology during his years at the Lakshmibai National Institute of Physical Education (LNIPE), Gwalior, where he did his bachelor’s and masters in Yoga and Physiology. From Around 2010, Bharat started working seriously and formally on his art. He is self taught, learning from the street artists of Europe and maintaining a prolific schedule of visits to the museums and galleries of the world, which he could combine with ease as he travelled heavily on the yoga mission. From 2016, Bharat started exhibiting his works in solo and group shows. Bharat straddles the world of abstraction as well as figurative art with equal ease. What marks him out as a painter is his ability to channel his unique background and experiences into his works.  Having spent many years with the spiritual adepts in the mountains and being one of them, he has both knowledge and access of the king that is unprecedented.Throughout his life, Bharat has been evolving a unique grammar of art, drawing from his incredible understanding of both the figurative and abstract genre.As a multidimensional artist, he works with a wide variety of mediums for his paintings and sculptures. Bharat likes to find his own expression and unbound by convention. For him no medium is too challenging, and no subject is beyond contemplation.