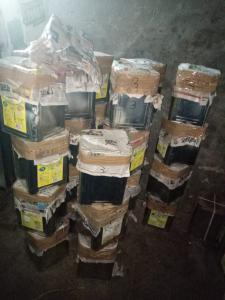 As a precautionary measure against sale of substandard sweets in the ensuing festive season, Food Safety teams have been put on high alert. They have been directed to maintain constant vigil on the bulk sale and purchase of milk and milk products, especially Khoya, besides the routine inspections, informed KS Pannu, Commissioner Food Safety Punjab.

“It is general impression that substandard khoya procured at cheaper rates from other states is stored ahead of  the festival season in the cold stores by the sweets manufacturers, so we are constantly checking the cold stores across the State and are also putting the owners on guard against storing spurious items’’, said Pannu .

Divulging into the details of the inspections, CFDA informed that 4 cold stores namely in Kapurthala, 7  in Bathinda ,6 in Hoshiarpur, 6 in  Jalandhar, 5 in Sangrur , 2 in Barnala cold store ,2 in Patiala, 3 in Sri Mukatsar , 2 in Fazilka, 5 cold stores in Amloh, 2 in Faridkot / Kotakpura area and 2 in Pathankot.

Most appallingly, the  Food Safety Wing Pathankot in a raid at Aman Cold Store found about 1.5 quintal of foul smelling khoya with storage dating back to over a year.It is linked with a sweets shop owner in Shahpur Chowk, Pathankot. The team took the samples and destroyed the khoya, not fit for human consumption. In the same premises, about 3.72 Quintals of fat spread was found which is sold as butter and it was linked with Balaji Enterprises. Sample of fat spread has been taken and whole of the stock has been seized.

Similarly, two bread manufacturing units in Amritsar were inspected and sealed due to poor hygiene of premises as well as for being run in residential areas without FSSAI license.Moulds were seen in the Buns and Cream Roles . Very low quality ghee, maida and cherry and other ingredients were being used in processing.

A Soda Manufacturing unit has also been sealed in Fatehgarh Colony, Anngarh, Amritsar for being run without mandatory license. An ill legal Water packing unit at Shri Goindwal Sahib, Tarntaran was also sealed on same account.