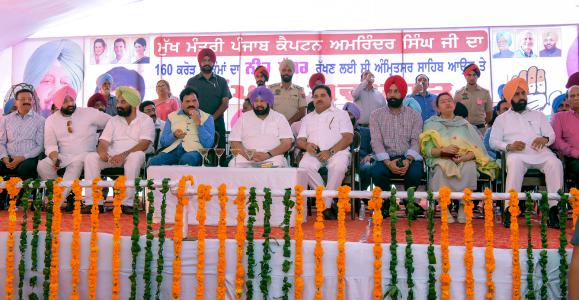 Amritsar, October 15: Punjab Chief Minister Captain Amarinder Singh on Monday laid the foundation stones for five infrastructural projects, worth Rs. 127.86 crores, in Amritsar, while announcing an additional Rs. 50 crore for tubewells to ensure seamless supply of clean water pending the completion of the canal water supply network in the holy city. The Chief Minister also announced a slew of tourism development projects, totalling Rs. 187.47 crores, for the upgradation of Amritsar, to showcase it as a global tourism destination. The Chief Minister pressed the button to lay the foundation stone, by remote, of two Railway Over Bridges (RoBs), one Railway under Bridge (RUB) and a flyover besides, extension of the existing Bhandari Bridge. The inauguration took place in the presence of Local Government Minister and Amritsar MLA Navjot Singh Sidhu, whom Captain Amarinder Singh credited with facilitating the necessary permissions from the Railways Ministry.
The projects, said the Chief Minister, would go a long way in boosting the infrastructure of the old town and reducing traffic congesting. Further noting that big cities like Amritsar, Jalandhar, Ludhiana and Patiala were facing acute water problems, the Chief Minister said with water levels receding the water received by these regions was becoming unfit for drinking, leading to spread of diseases. Announcing his government’s decision to provide canal water to these four cities, the Chief Minister underlined the need for regular and thorough testing of water. Speaking on the occasion, Sidhu lashed out at the Badals for failing to develop the city during their 10-year rule. The Akalis had built only one bridge in 10 years while the Captain Amarinder Singh government had started work on five, he said, adding that tenders were being issued for these projects and work on them will be completed within a year. The projects for which the foundation stones were laid by the Chief Minister included ROBs at Vallah Phatak on Amritsar-Delhi Railway line and on Amritsar-Attari section at Khajana Gate, RUB at Jaura Phatak on Amritsar-Delhi section and Amritsar-Pathankot section, & of Flyover at Sant Singh Sukha Singh (SSSS Chowk) on Majitha Road, besides extension of the existing Bhandari Bridge by constructing a parallel additional bridge. The total cost of these projects is Rs. 127.86 Crores, of which Rs. 111.56 Crores would be borne by the Amritsar Improvement Trust (AIT), with the Railways contributing Rs. 16.30 Crores for the ROB at Vallah being built on cost-sharing basis. AIT has already earmarked Rs. 130 Crores in terms of FDRs for the timely execution of these developmental works.